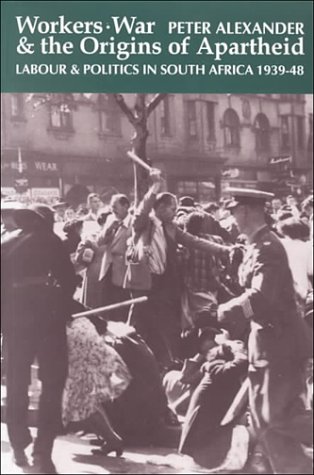 Peter Alexander uncovers a widespread inter-racial worker unity in Second World War South Africa. This was based on rapidly expanding manufacturing industry: by 1943, private manufacturing contributed more to national income than farming or mining, whilst fixed capital in all manufacturing rose an estimated 50.3 per cent between 1938/9 and 1944/5. By 1946, manufacturing employed 388,684 people, compared to 499, 461 in mining. The new workers were blacker (35.9 per cent were Africans, Indians or Coloured), more feminized (12.1 per cent in manufacturing) and more urbanized (40 per cent of South Africans by 1945).

Faced with a State unwilling to confront labour in wartime, a tight labour market and inflation reaching 40 per cent, workers won significant gains.  Some, like JCATU, used wage determinations to secure gains; others struck for cost of living allowances and ‘war bonuses’. Strikes rose threefold in 1942, with more strikers and days lost than in any year since 1922. Equally remarkable was interracial worker action in SATLC unions: a five-week strike by sweet workers in 1942 -the largest strike in ten years -was jointly won by 625 Whites and 495 Africans; a multi-racial strike at the OK Bazaars secured ‘complete capitulation’ in a single day; in Durban, Africans and Indians at Dunlop struck for thirteen weeks after employers victimized Indians.

African unionism developed rapidly. JCATU and CCNETU merged in 1941 to form the Council of Non-European Trade Unions (CNETU), and organized stoppages amongst coal, railway, dairy, municipal, meat and brick workers. Partly as a result of this militancy- Alexander suggests African workers were more militant than Whites – average wage gaps between African and White in industry

fell from 5.2: 1 to 4.0:1 during the war. By 1944 African unions had over 1oo,ooo members, and SATLC 168,432 by 1946, two-thirds in open unions. AS the war turned in favour of the Allies, government and employers hardened. In January 1942, War Measure 9 banned strikes in war industries and essential services; in December 1942, War Measure 145 banned strikes by African workers in general; in August 1944, War Measure 1425 prevented African union meetings on  mines; tentative government moves to deracialize industrial relations came to naught.

Yet strike action reached its highest levels in 1943, far higher -Alexander shows -than previously recognized and township activism also increased. White workers showed ‘greater racial toleration’ and a ‘leftish’ shift, reflected in SATLC resolutions, the growth of the South African Labour Party (SALP) and the municipal successes of the Communist Party of South Africa (CPSA). The CPSA also became ‘the single most influential force among black workers’ and decisive in CNETU.

The trend continued in 1946, with ‘more strikers . . . than . . . all previous years, except for 1920, and more “days lost” than in any other year’, but the tide was turning. Smuts repressed the 1946 African miners’ strike, subsequently prosecuting CPSA leaders, whilst employers resisted mass strikes by White miners and builders in 1946-7. Rising African unemployment undercut African unions, membership falling 80 per cent by 1950, reflecting a still mainly migrant and unskilled workforce.

Thus, Alexander concludes, controversially, that White labour was *defeated* in 1948 inasmuch as its class organizations were crippled and inter-racial unionism halted.

Overall, there is little to fault in this superb nuanced analysis of White labour, research on which remains mired in hostile liberal accounts, and leftist analyses for which White labour is at best irrelevant. Moving beyond the usual stereotypes – greedy labour aristocrats and lumpen ‘poor Whites’ – Alexander forges a link to White labour’s *own* intellectual traditions, notably Walker and Weinbren, Herd and Sachs.

More could be said about the union structures and practices that made it possible for CNETU’s Port Elizabeth head to earn R129 monthly. Racial identity and loyalty is somewhat underplayed, Alexander’s own strike figures showing only 5.5 per cent of non-White strikers, and 18.1 per cent of White strikers participating in mixed strikes. To be fair, Alexander points to open unionism’s limitations – such as segregation in the Garment Workers Union – but the impact of racial sentiment amongst African, Indian and Coloured workers is only mentioned in passing. Even the inter-racial CPSA had effectively adopted an African nationalist programme. Finally, support for Afrikaner Nationalism need not imply a sharp political break with prior ‘leftish’ White labour sentiments, insofar as Nationalism presented itself as a  champion of White working people, opposed to *geldmag* (money-power) and the crimes of (British) imperialism.