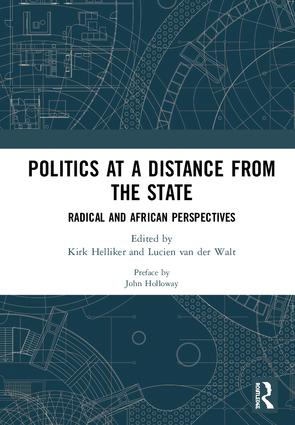 For decades, most anti-capitalist and anti-imperialist movements identified radical transformation with capturing state power. The collapse of these statist projects from the 1970s led to a global crisis of left and working class politics. But crisis has also opened space for rediscovering alternative society-centred, anti-capitalist modes of bottom-up change, operating at a distance from the state. These have registered important successes in practice, such as the Zapatistas in Mexico, and Rojava in Syria. They have been a key influence on movements from Occupy in the United States, to the landless in Latin America, to anti-austerity struggles in Europe and Asia, to urban movements in Africa. Their lineages include anarchism, syndicalism, autonomist Marxism, philosophers like Alain Badiou, and radical popular praxis. This path-breaking volume recovers this understanding of social transformation, long side-lined but now resurgent, like a seed in the soil that keeps breaking through and growing. It provides case studies with reference to South Africa and Zimbabwe, and includes a dossier of key texts from a century of anarchists, syndicalists, insurgent unionists and anti-apartheid activists in South Africa. Originating in an African summit of radical academics, struggle veterans and social movements, the book includes a preface from John Holloway.

Preface: at a distance from the state (John Holloway)

2. Constructing the domain of freedom: thinking politics at a distance from the state (Michael Neocosmos)

3. Back to the future: revival, relevance and route of an anarchist/syndicalist approach for twenty-first-century left, labour and national liberation movements (Lucien van der Walt)

5. Broadening conceptions of democracy and citizenship: the subaltern histories of rural resistance in Mpondoland and Marikana (Camalita Naicker and Sarah Bruchhausen)

6. A feminist perspective on autonomism and commoning, with reference to Zimbabwe (Tarryn Alexander and Kirk Helliker)

7. From Below: An overview of South African politics at a distance from the state, 1917-2015, with dossier of texts (ompiled and edited, with introduction, by Lucien van der Walt)